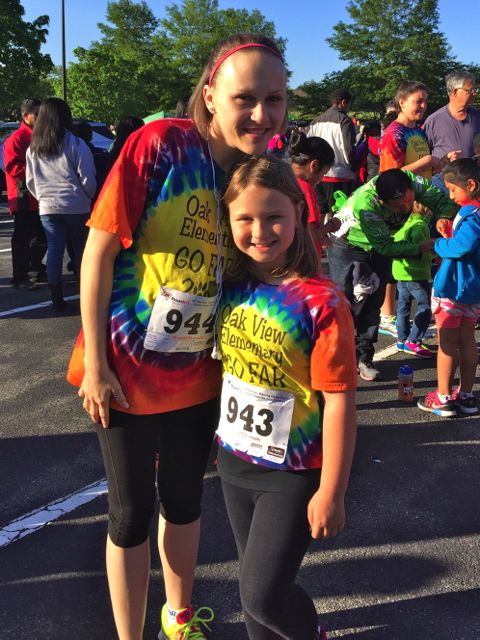 Tiffany Hall with daughter Elizabeth (above); (Below) Tiffany, Joe, Katelyn, and Elizabeth Hall at a fall GO FAR event.

Billed as an afterschool running club that teaches healthy habits and goal setting, GO FAR has made an impact on hundreds of students in its 14 years. So when adults sign up to help motivate the kids, they are often surprised at the impact the program has on their lives as well.

Tiffany Hall found out about GO FAR three years ago through her work as a McDonald’s manager in High Point. Because of McDonald’s GO FAR sponsorship and participation at the races, she heard about the event and asked her then-fourth-grade daughter, Katelyn, if GO FAR was at her school. She and her daughters joined the Oak View Elementary club.

Because her youngest daughter, Elizabeth, was in first grade and young for Oak View’s program, the coach said she could join if Hall helped out. So she did, coming to practices and helping with proper stretching, encouragement, focus, timing the runs, and talking about things the students thought they did well.

Hall was never a runner and her first 5K at Piedmont Parkway was admittedly tough. “It was extremely hard the first time I did it,” she said. “I had never run so I didn’t know the different techniques that I know now. I didn’t know how to pace myself. It’s easier now because I know it’s not about full running.”

Hall was diagnosed with juvenile diabetes at age 3. Living with that has made her aware of the importance of eating right, but GO FAR has helped fill in the exercise component.

“I work all day and then go straight to practice,” she said. “I get out there and I feel good.” 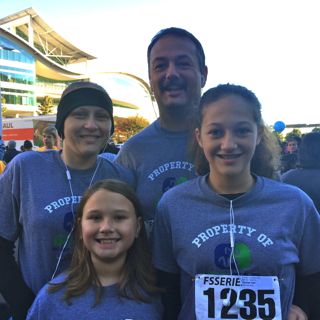 Because GO FAR has had a healthy impact on her daughters’ view of a healthy lifestyle, it’s inspired Hall even more. “They’ve been more conscientious about the things they eat, the types of food they eat.”

Hall said she’s more aware as a mom of what her kids are eating. They eat more fruit now. There’s more of a discussion. She contributes that to GO FAR.

“I think it’s getting to understand what certain things can do for your body,” Hall said.

The family’s involvement with GO FAR has had valuable impact beyond the dinner table. Katelyn, now a seventh grader, runs track at Penn-Griffin School for the Arts. They run as a family. Along with their dad, Joe, they have run in GO FAR races, competing for the best times.

And being involved has given Elizabeth, now 8, drive and excitement, wanting her mother to come to practice. “It really builds self-confidence and morale,” Hall said. “It kind of sets them up for success. If they try really hard and put their mind to it, they can do it.”

And so can mom.