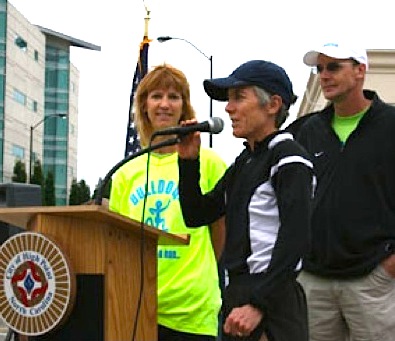 Most of the anxious runners gathered in front of her likely had no idea who the petite woman was as she wished them good luck. The spring 2009 GO FAR Family 5K was held in conjunction with the North Carolina Marathon in downtown High Point, NC. Joan Benoit Samuelson, gold medalist in the first women's Olympic marathon, was in town as a guest of the marathon. She became an instant fan when she met GO FAR Founder Robin Lindsay and learned about the program. After deciding the night before to run, Samuelson won — overall — the half marathon, then dashed over to help start the GO FAR race. She's shown here flanked by Lindsay and Steve Bennett, former running store owner, race director, and GO FAR board member.

So what advice did the two-time Boston Marathon winner give to the 600-plus runners, most of them about to start their first race? "Look down," she said, "and make sure you've tied your shoelaces."