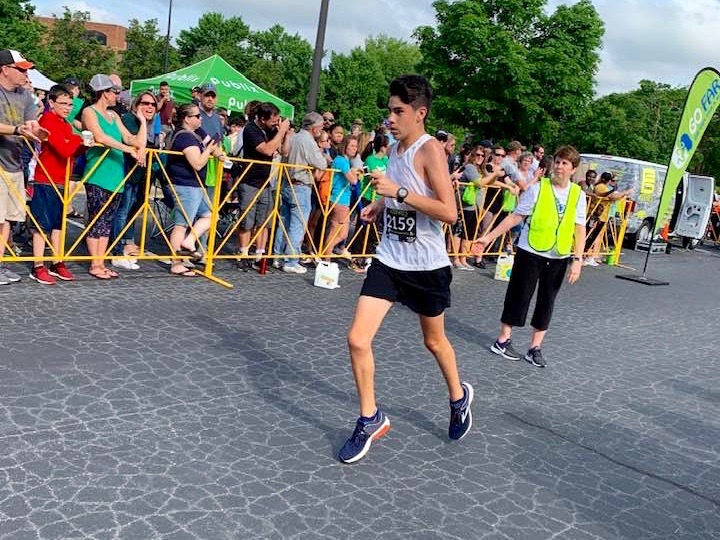 Ledford High freshman Isaac Reyna finishes first in the May 2019 GO FAR 5K. Below, Isaac after his first GO FAR race at age 8.

In a race with the most runners ever, he was the fastest ever. Isaac Reyna started GO FAR at age 8, so it was only fitting he hit his PR at this month’s GO FAR event. Reyna finished in 17:29.54, becoming the fastest finisher on GO FAR’s record. It was also GO FAR’s largest event with 2,554 runners.

“It felt really good to come around that last turn and see that time,” he says. “I didn’t think I had it in me.”

The 14-year-old freshman runs cross country and track at Ledford High School, but he was introduced to running through GO FAR at Friendship Elementary.

“He was really excited to do this race at 8 years old, and that hasn’t changed,” mom Janess Reyna says. 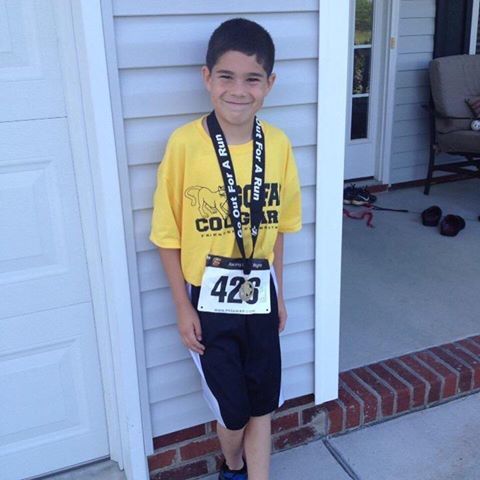 Isaac played baseball and basketball in middle school, but returned to running in eighth grade with the High Point Blaze, an AAU track team. Now he runs year-round at Ledford and looks for 5Ks as practice.

The GO FAR 5K was a natural choice. It’s a program he knows and he can give a little something back to.

“It was my first exposure to running and it’s a really good program,” Isaac says. “Being invested in that and going out there being someone to hopefully look up to for kids who might want to run in the future, it’s just something I can go out and do.”

Getting his fastest 5K time was a definite perk, especially for someone who admits to being a bit competitive.

“I was very tired at the end of it and it was kind of hard to get my mind around it, that I cut off about 80 seconds over my previous PR,” he says.

Claiming bragging rights over his older brother Aidan, a senior at Ledford who is also a runner, helped.

“It was faster than his best time so he was both proud of me and mad at me I think, or probably a little annoyed that his freshman brother ran a faster time than him,” Isaac says.

Isaac qualified for the regional meet in the 2-mile run this year in a field of mostly juniors and seniors. He finished second overall in the Pinnacle 5K and has placed 1st or 2nd in numerous other events.

He says it’s important to set realistic goals. He wants to break the 5-minute mile and run 17 minutes in the 5K all year.

“If I went out there and said I’m going to run a 15-minute 5K, I would not even come close to that, and I would probably run slower than 18 minutes because that would be too ambitious,” he says. “So set realistic goals for yourself and push your hardest to achieve them.”

Want to run a 5K? Join a GO FAR club and train for our next GO FAR Family 5K & Fun Run!