A 5K Finish: Student's Determination Has No Limits 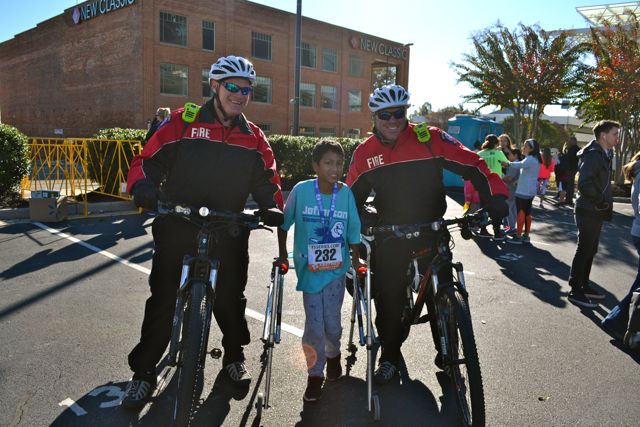 Josue Romero plays soccer and baseball like a lot of other kids. And when he sits for too long, he feels the urge to run around. But unlike the kids in his Jefferson Elementary GO FAR club, Josue uses a walker because he has a form of cerebral palsy.

In November Josue added the GO FAR 5K to his list of triumphs—the fifth grader and his mother crossed the finish line at 56:01 to applause and high-fives. Strangers approached him afterward and congratulated him.

He felt like a famous person. “That’s the first time I run like that,” he said. When he got the medal, he said he thought, “I finally did it!”

Josue and his family moved to Greensboro from Venezuela about a year ago. He knew no English. He works with ESL teachers at school, and one provided some translation for this story. Now Josue talks a lot, smiles all the time, and is a well-liked student. He insists on doing what everyone else does, even if it takes him longer, said Cassandra Ott, Josue's ESL teacher.

GO FAR coaches Lauren Bianchi and Amanda Martin encouraged Josue and his siblings, Joaquin and Maria Angelica, to sign up for the fall club. They all did. Martin offered to push Josue in a wheelchair during practice.

But as with his schoolwork, Josue set his own terms. Though he did use a wheelchair some during the race, he didn't during practice. He used his walker, taking breaks when needed. During a running drill, Josue’s cone was placed a shorter distance than the other kids’. “He said, ‘I can do this,’ and moved it to the same distance as everyone else,” Bianchi said.

“Josue simply persevered and smiled the whole way around [the practice path], even during the hottest and most humid days,” Bianchi said. “I never heard him complain once. As a serious runner myself, I found his positivity and determination very inspiring during my own runs.”

Josue has had five surgeries with recovery requiring use of a wheelchair. He said the confinement was boring and he needed to get up and run. He likes to run. A 5K? “Maybe some people don’t do that because they think it’s too hard,” he said. Not Josue.

Ott has learned a lot from Josue. “I believe that he can do anything he sets his mind to do—he may need to do it in a slightly different way, or have some sort of assistance, or take a little longer, but he can do it,” she said.

“Looking at Josue, one might think that he faces plenty of limits,” Bianchi said. “[He] is the perfect example for anyone who agrees that there are no limits for those who have a positive attitude and perseverance.

“I am so happy that GO FAR gives all kids the opportunity to set and reach goals while being physically active,” Bianchi said. “Having a student like Josue on the GO FAR team is so inspiring and reminds me why I do what I do.” 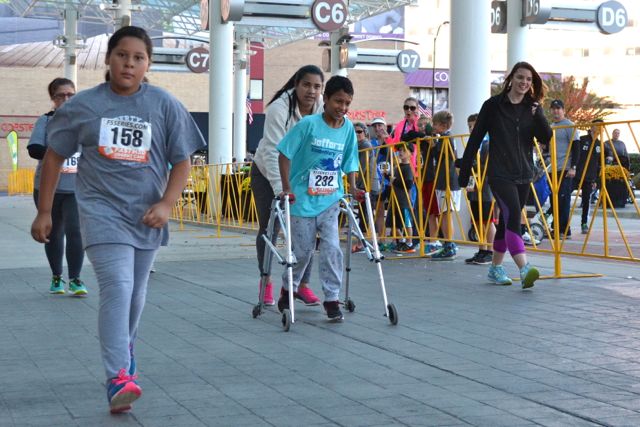